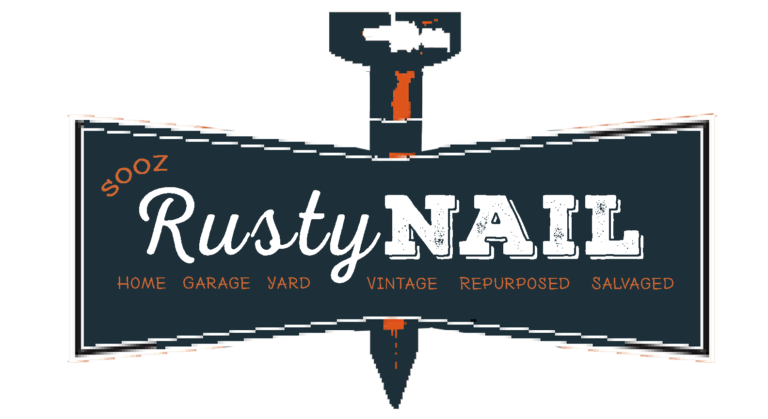 In 2008, Steve Backus starred in a Pacific Northwest lifestyle commercial for Pemco Insurance in which he nonchalantly carved a small bear that doubled as a toilet paper holder while the announcer told a little story about chainsaw carving and then declared, “Roadside Chainsaw Woodcarver, you’re one of us.” Both funny and memorable, it first aired during a Seahawks game, introducing Steve to millions of football fans. But more importantly, it tied viewers to a regional art form that many of us hadn’t given much thought to beyond roadside novelty or must-see attraction at the Puyallup Fair.

To realize the depth and breadth of Steve’s role in the industry, one must first understand the building blocks of chainsaw art, the era in which the genre was seeded, and the philosophies behind the movement. For example, when Steve’s uncle Mike pioneered the concept in the 1950s, he was one of three known chainsaw carvers in the United States, plus, social media was at least 50 years into the future, and the full history of the art form has gone largely unpublished. All of this makes it difficult to imagine how something like chainsaw woodcarving, which in the grand scheme of things is still fairly new, took root and spread globally without cameras in our pockets. It’s much easier to imagine it was just always a thing – but as Steve will tell you, that’s not the case! 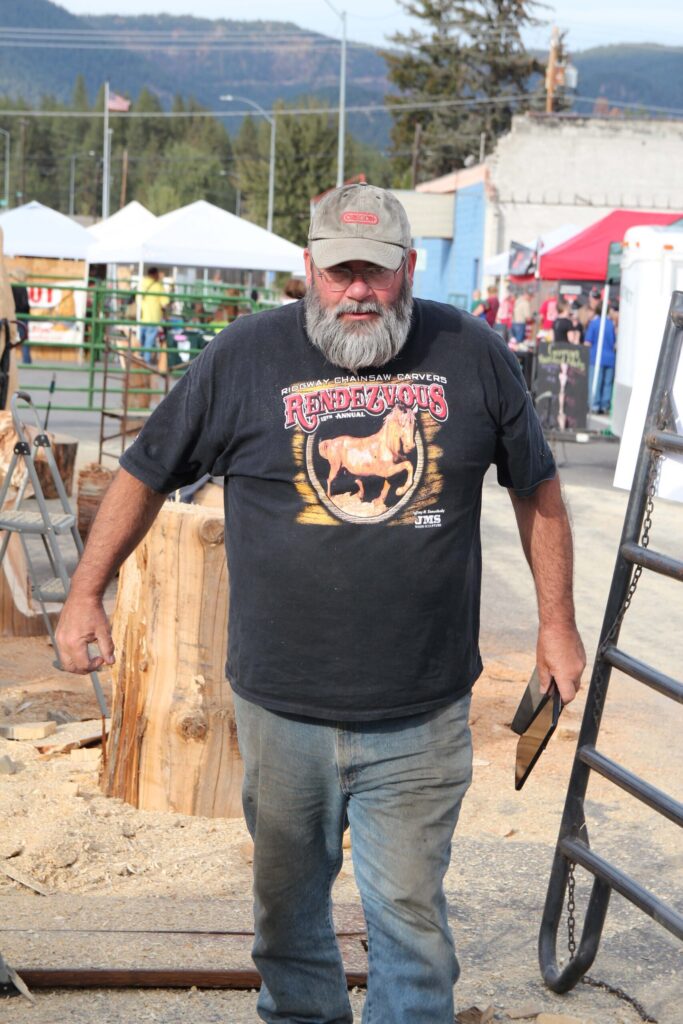 Tramp logger, you're one of us!

Born in 1959 at Sacred Heart Hospital in Spokane, Steve Backus is the first child and oldest son of chainsaw woodcarving pioneer Judy McVay. His father, Dirty Dick Backus, ran with a half dozen tramp loggers known as the “Dirty Six” and included Steve’s namesake, whose nickname was “One Eyed Wop,” and their families who frequently moved from logging camp to logging camp between California and Alaska. A motley crew, they worked hard, played hard, and had each other’s backs – no matter what.

Fight or be funny

As a tramp logger kid, Steve was fully immersed in a culture where switching schools was a tradeoff for the security of a loyal clan. In 1970, he entered fifth grade in Humptulips. By this time, his parents were no longer together, and Steve had already lived in multiple northwest states and attended four different schools. Every child in that situation develops a strategy to deal with it. For Steve, who learned early on that bullies naturally want to fight the new kid, especially when he’s a big guy, survival hinged on being funnier than he was big; a trait that serves him well to this day. 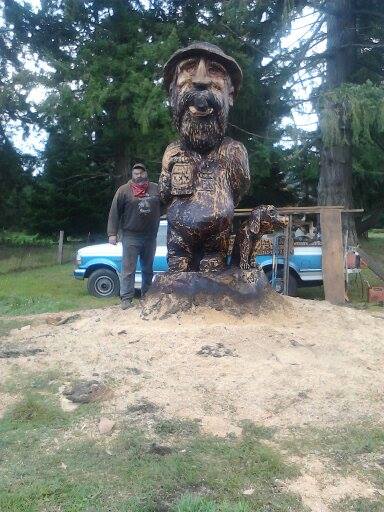 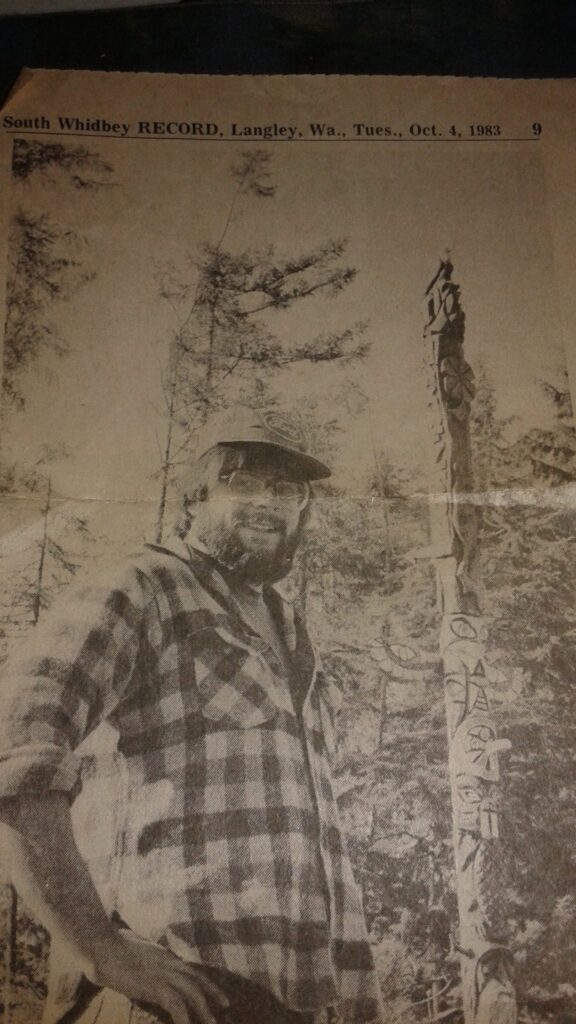 When Judy and the kids settled in Humptulips (1970 – 1975) they were joined by the McVay brothers: Mike who had been chainsaw carving since 1956, and Pat who was gifted in fine furniture carpentry. Together, the siblings carved some of the most iconic works of art in the Pacific Northwest, such as the Rain Gauge on the back of the Lake Quinault Lodge. At that time, no schools existed nor were videos or tutorials available to teach chainsaw woodcarving so apprenticing back then came by way of luck or happenstance. In Steve’s case it was genealogical luck, necessity, and his natural desire to build a network of friends that positioned him perfectly to learn from several masters and help carry the family legacy forward. 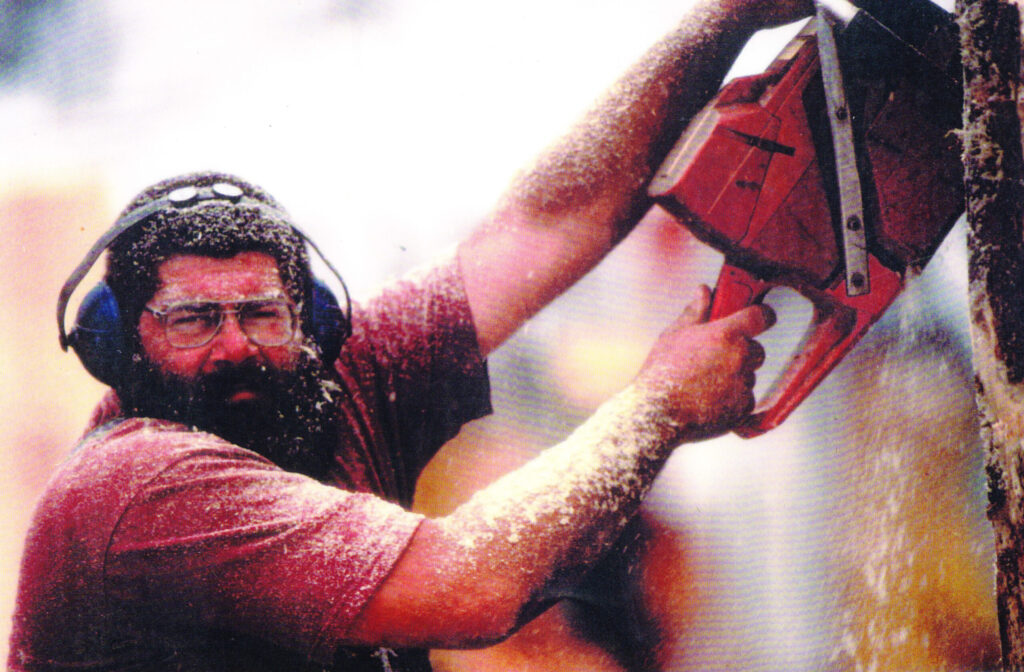 If you want old friends, you have to start young

In 1975, the McVay carving operation moved to Whidbey Island and Steve, a self-sufficient junior in high school, regularly hitchhiked back to Grays Harbor County, keeping ties with friends in Humptulips as he continued to build a life on Whidbey. The same year, a family friend commissioned him to make an eagle headboard and accompanying footboard. A “crazy idea,” it was met with resistance from his carving elders due to his age and the dangers of operating a clunky saw without the safety mechanisms carvers have today. But sometimes, it’s better to apologize later than ask permission and for Steve, this was one of those times. With easy access to all the tools and supplies needed, he carved the bed fully expecting to pay a consequence and instead his raw talent was recognized and encouraged; a twist that cemented his woodcarving career.

Uncle Pat McVay, nine years Steve’s senior, was more like a brother than an uncle and the two had been working together, helping with operations from the beginning. Once Steve proved his ability to carve, Pat, who had been more interested in finishing than carving jumped on the bandwagon too. The pair started making history immediately by traveling to events, setting up home show exhibits for McVay Woodcarvings, and facilitating Mike’s fame as chainsaw entertainment at the Puyallup Fair beginning in 1976. In 1981, they helped start the first ever World Champion competition and by 1990 Pat and Steve had over 80 competitions across the US under their belts. As Steve explains it, he was all-in and moved heaven and earth to attend as many carving events as possible. He’d beg and borrow to get gas money and his stories of driving long distances, trading carvings for hotel rooms, food, gas, and car parts are entertaining and abundant! To date, Steve and Pat have logged participation in over 400 competitions worldwide while channeling the tramp logger spirit of sharing knowledge with carvers – everywhere they go.

one + one makes four

In 1982, Steve met Nanette and her three-year-old son Corey and fell in love. Partners in life and in the carving business for over three decades now, they decided early on to establish roots and settled on Whidbey Island where they still live. Steve mainly wields the chainsaw and Nanette, a talented artist, takes the lead on finishing; burning, brushing, and painting their creations. Having grown up with Judy, Steve knew that making a living this way wasn’t a simple career choice, but it allowed freedoms that a 9-5 job can’t, and he was determined to do whatever it took to make it work and remained dedicated to ensuring that his kids would be able to stay in one spot throughout childhood. Nanette and Steve share a deep commitment to the carving world and their three kids; Corey, Chelsey, and Boone, and grandson, Crehan, who all grew up in the carving culture. Having carved their first pieces before age 13, they have also competed in competitions.

Networking is a superpower

Maybe it’s his tramp logging roots, maybe he was born with it, but one thing is for certain, Steve Backus is a master carver and a master at networking. With a deep passion for the sport-side of carving and a steadfast determination to make his living doing what he loves, Steve Backus has made the acquaintance of more than 1000 carvers over the course of his lifetime. And there’s probably no bigger examples of his networking capabilities than his instrumental role in forming the Cascade Chainsaw Sculptor’s Guild, which began as a conversation among a few carvers when Steve was barely old enough to drink; this organization, formalized as a non-profit in 1987 upon which Steve has served as president more often than not, is what led us all to Westport. 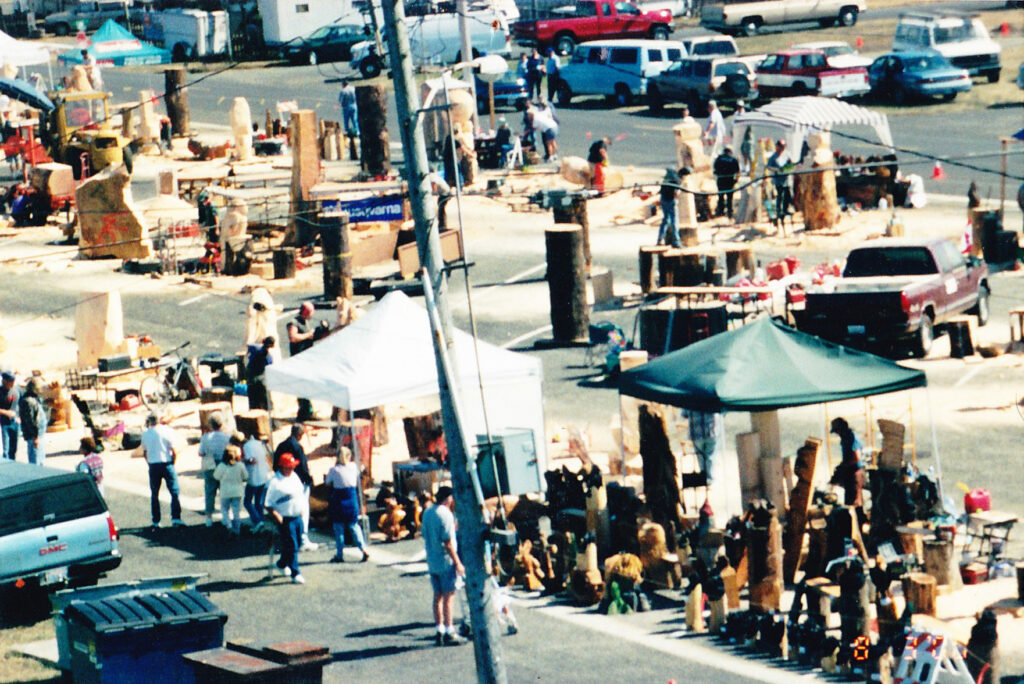 In June of 1990, Steve, Nanette and the kids took the long way home to Whidbey from a competition near Mt. Rainier. Truck loaded with unsold carvings, the gang headed south and then west to the coast bartering (Steve-style) his carvings for hotel rooms along the way. First night they landed in Westport and by the end of the following day, Steve had met the owner, engaged in a conversation, and the two were hatching a plan to bring a carving competition to the small seaside town that would be held – two months later.  And so it began, the first ever Guild-sanctioned event. Built on rules agreed upon by a network of carvers, Westport promoted their talent, was inclusive of all carvers, and gave them new opportunities to make an income. It was also the largest event of its kind and served as the foundation for more than a half dozen events, which then spawned more. With no less than 50 carvers in attendance in its heyday, The Big One at Westport could not have been accomplished that first year or subsequent years if Steve Backus did not have the networking superpower to summons the carvers, volunteers, and timber needed to pull off such a monumental task!

Steve leveraged events to build a network of customers, particularly in the 20-mile radius around the Puyallup Fairgrounds. A venue where he spent 41 years competing and selling, as Steve puts it, he worked it like a stump carving trapline. Thomas Guide Map book under his arm, charting the route to fill the area’s insatiable appetite to turn widow makers into art. And on that trapline, Steve has carved more than 300 stumps, fifty of which reside in Fircrest! (Their town hall carries the map if you’re looking for a fun activity.)

Pemco may bill Steve as the “Roadside” Chainsaw Woodcarver but he’s so much more!

Will Steve ever retire?

Still carving and starving on Whidbey Island, Steve and Nanette’s fence has been featured in newspapers and it’s a site to see – for sure! Lined with odds and ends from carvings that never sold, and boneyard rejects, it’s like the woodcarving version of the island of misfits! Will Steve ever retire? Doubt it. 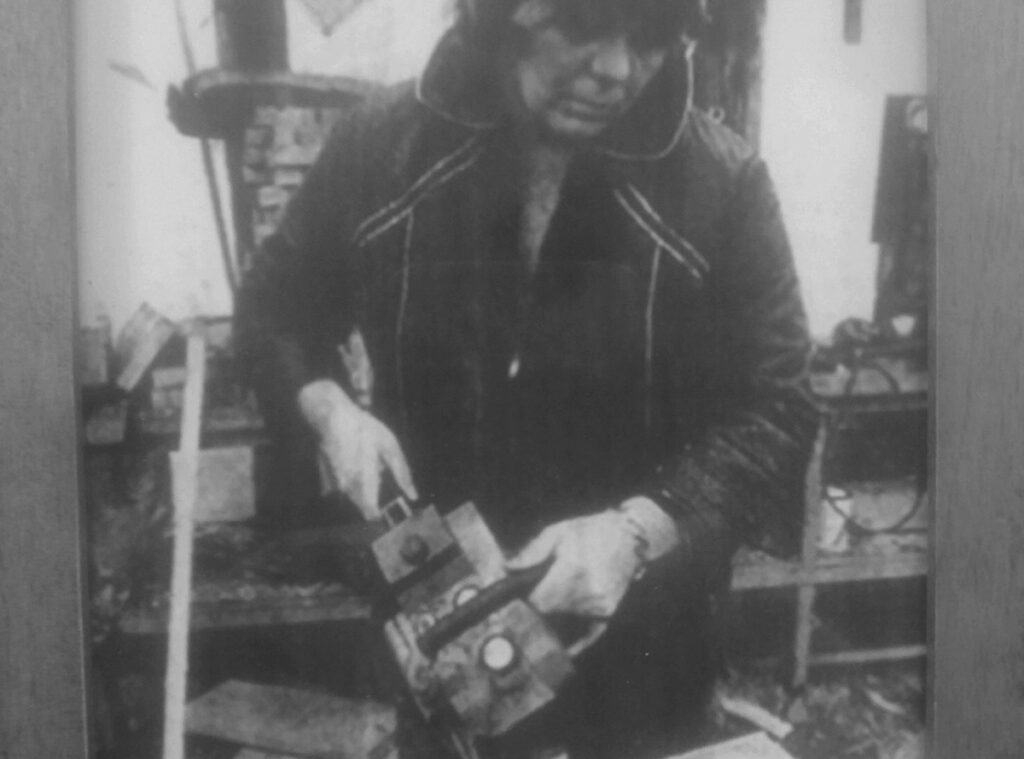 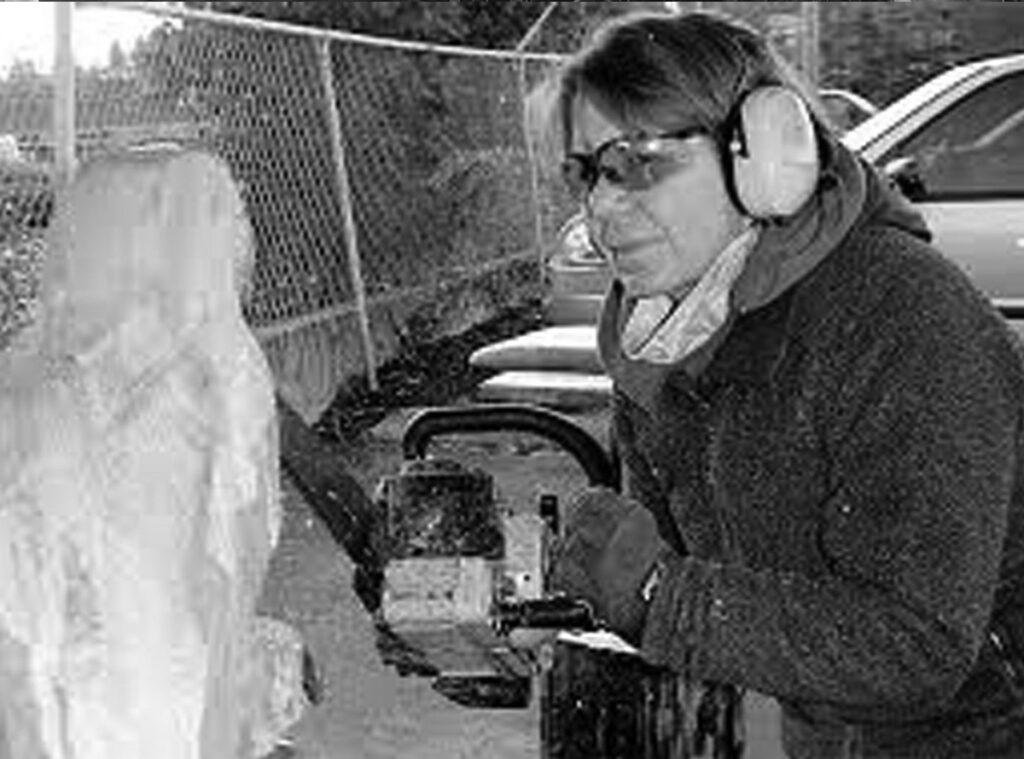 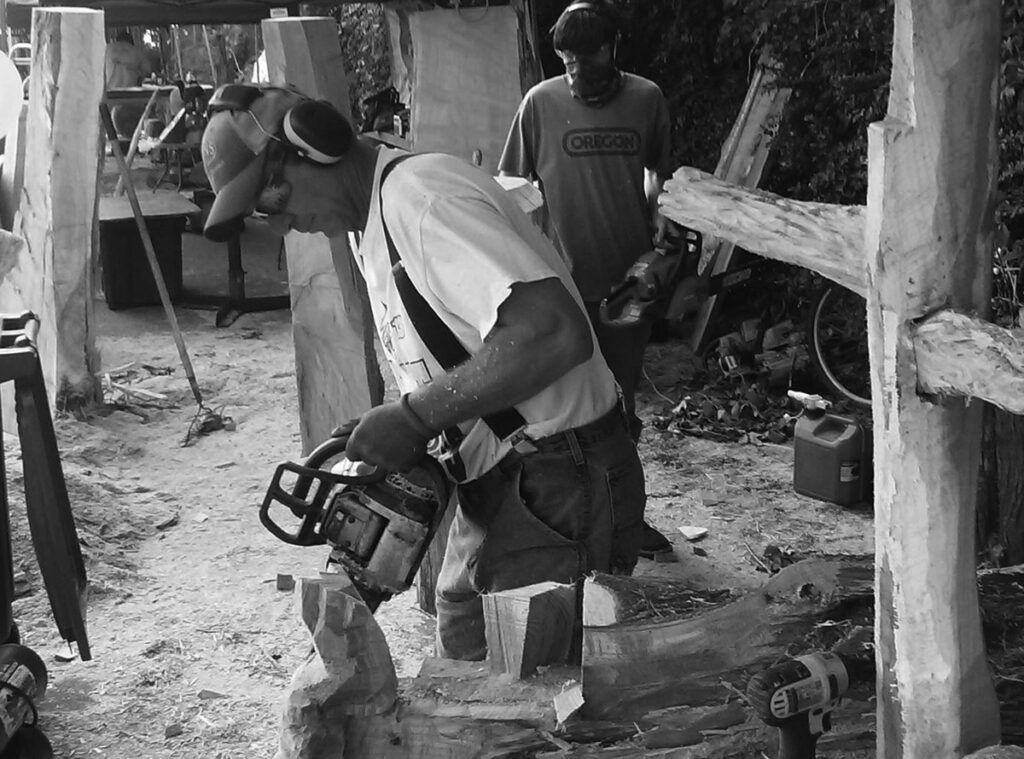